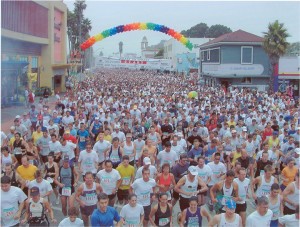 Registration for 2014 is sold-out!
Official Wharf to Wharf Website

Each year, on the fourth Sunday in July, thousands of runners from across America and around the globe return to Santa Cruz, California for the annual six-mile race to Capitola-by-the-Sea. First run in 1973 by a handful of locals, the Wharf to Wharf Race today enjoys a gourmet reputation in running circles worldwide. Its scenic, seaside setting, perfect weather, and festive beach party atmosphere make it a favorite of casual joggers and elite athletes alike. Limited to 16,000 runners on a first-come-first-served basis, its field sells out months in advance. Runners are thrilled just to get in!

Deemed "The best little road race in California", it begins at the Santa Cruz Wharf, travels along the coastline, and finishes at the Capitola Wharf. Whether you walk, run, stroll, or strut, a trip down the picturesque coast is always a treat.